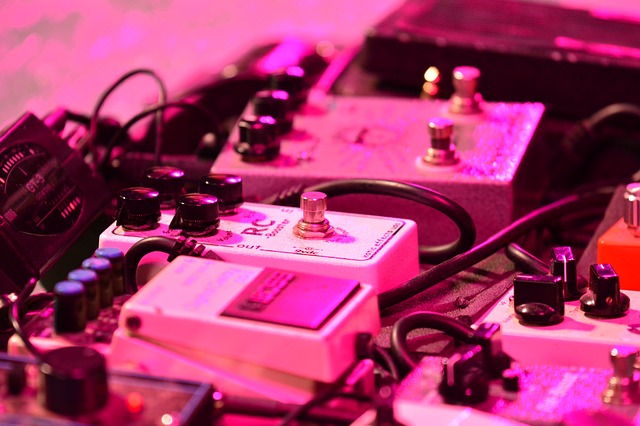 It was Les Paul who was thought to have developed the flanger effect back in the late 1940’s. So, it’s been around a while!

Before we start the review of our best flanger pedals, it’s probably worth taking a moment to familiarize (or maybe reacquaint) ourselves with what the flanger actually sounds like.

The best description is that of a sweeping jet. Fans of rock/metal/prog should be particularly familiar with it – check out the playlist below to hear some great flanger examples: –

The effect, similar to the chorus, is produced by delaying the sound slightly, and altering that delay over time while playing – this causes the harmonics to phase cancel, creating that distinct sweeping sound.

It’s generally a simple effect to customize (there are exceptions), with most flangers having a couple of common controls (different manufacturers use different descriptions): –

We’ve chosen and reviewed our favorite single effect flanger effects pedals – hopefully there should be something for everyone and every budget. At least you can now make an informed decision. If you’re looking for other effects pedals to compliment your flanger then check out our 24 Best Guitar Pedals for Beginners and Pros Alike reviews.

Towards the budget end of the flanger market there are a couple of gems, the first of which is the JOYO JF-07. If you’re an “occasional flanger” and don’t want to spend a fortune, then read on.

JOYO are a Chinese manufacturer, producing a wide range of guitar gear, including amps, accessories and of course effects pedals.

Constructed of aluminum alloy, the unit feels solid and well-constructed.

It’s a simple enough flanger effects pedal to adjust to your liking, featuring the following knobs: –

There is also the addition of a true bypass foot switch.

I spent quite a bit of time playing around with this little unit, and enjoyed experimenting with the huge range tones and sweeping effects it could generate – even having some success recreating some early Pink Floyd. For the money you’re getting a competent all-rounder.

I’ve mentioned value for money several times; that, and the genuine range of tones and sweeping jet sounds I was able to create make the JOYO JF-07 a go-to device for new or infrequent users. Love it.

If you have a little more in your budget, or wedded to the Boss brand, then you need to check out the Boss BF-3 stereo flanger pedal. This is the latest iteration of the classic Boss BF-2.

The Boss BF-3 flanger has a comprehensive set of controls of available: –

This is a feature rich flanger effects pedal – one in particular we really enjoyed experimenting with was the tap tempo! The variety of modes available provides an almost unlimited number of tones and sweeping effects. The inclusion of a separate bass input and stereo outputs puts this in a different class to some of the entry level devices available.

Build quality is as you would expect coming from Boss – bullet proof!

The Boss BF-3 flanger is a worthy successor to the famous BF-2. During our test it performed flawlessly. You’re paying for a premium product, but one that offers some amazing effects, and will hopefully last you a lifetime. I guess for some Boss fans it’s literally the only flanger effects pedal that will be considered, for the rest of us – definitely one to add to the shortlist.

You may not be familiar with the Donner brand, they are a relatively young company (founded in 2012), but have made a good reputation for themselves, particularly in the affordable “mini” effects pedals niche.

The Donner Jet Convolution flanger effects pedal we reviewed packed quite a punch.

Unlike the Boss BF-3 and other flangers we’ve reviewed, the controls and functions of the Donner Jet Convolution are pared back a little. Not necessarily a bad thing.

The unit comes in a durable white aluminum alloy chassis.

This is the cheapest flanger effects pedal in our flanger show-down, but you shouldn’t associate any negative conations with that statement. We were able to create some fantastic tones and effects with it, cranking out some classic metal and hard rock tunes – I’d be more than comfortable using this live or in the studio. The knobs/switches were intuitive and easy to use.

For such an affordable effects pedal, the Donner Jet Convolution flanger is difficult to criticize. If you’re new to flanger / chorus effects I’d recommend checking this out, you’ll not be disappointed.

TC Electronic was founded in Denmark back in the mid-seventies, the first product they developed was a stereo flanger – so it’s fair to say they have quite a pedigree in this space!

The Vortex Mini Flanger is another small form factor effects pedal, but don’t let the size fool you, this effects pedal is packed with plenty of features.

The standout feature has to be TonePrint – this feature lets you load custom tones from your favorite guitar players around the world (think John Petrucci, Bumblefoot, Nick Beggs, Dweezil Zappa amongst many others!), and if these don’t float your boat then you can create your own custom sounds using the free desktop and mobile apps.

TC Electronic have kept the controls on the device to a minimum, although using the app you can remap these!: –

The time we spent using the Vortex Mini flanger was not enough, there’s just so many features to play with, and once you get started with the editor, you’ll be hooked on creating your own personal tones. Check out TC Electronic TonePrint portal: –

For a techie like me, I love the ability to create and customize my own effects, and being a fan of some of their artists – it’s a neat feature to be able to load their sounds. It’s not the cheapest flanger effects pedal out there, but the features more than compensate for that.

The Zero Point Flanger is the most direct analogy to studio tape flanging that anybody has come up with. It is a REAL TIME effect not a typical modulation effect.

The Zero Point flanger by Catalinbread stands out from the crowd in that it operates in real-time – there’s no Low Frequency Oscillator (LFO) that you will find on other flanger effects pedals. Note: LFO determines the frequency of the modulating time delay (higher rate = faster sweep), without LFO the flange becomes unpredictable – adding a little spice to your sound!

This is old school foot control only – no dials for range, speed, color etc – can’t get any simpler than that. Pressing and holding the footswitch gives you a nice warm upward flanging tone – lift your foot off and the flange sweeps back down to where it started.

There are two foot switches: –

We really liked the unpredictable sounds the effects pedal created, and the simplicity was refreshing – letting us spend more time playing that tweaking. One for the prog fans.

The Zero Point flanger by Catalinbread is no ordinary guitar effects pedal, this will take you back to a more authentic/analogue sound. We love the interaction with the pedal, having foot control only makes it feel like an extension of the guitar that other flanger effects pedals don’t give you. The lack of control and adjustment will be a turn-off for some, but spend a little time with it and you be delighted with the results.

In stark contrast to Zero Point flanger by Catalinbread this American made EarthQuaker Devices Pyramids™ pedal is packed full of modes, presets and customizations.

Let’s start by working our way around the effects pedal: –

With so many effects and modes to choose from the ability to customize your flange sound seems endless, from the subtle to a rich roaring jet sweep you’ll definitely find something to your liking. Though you’ll probably spend more time experimenting with it than actually playing..!

If you’re looking for versatility then you’ll definitely not go wrong with the EarthQuaker Devices Pyramids™ flanger. The save function is great – having spent an age finding the right tone, you’ll not want to lose it. If you can stretch your budget – it’s one worthy of serious consideration.